All Information Subject to Change. 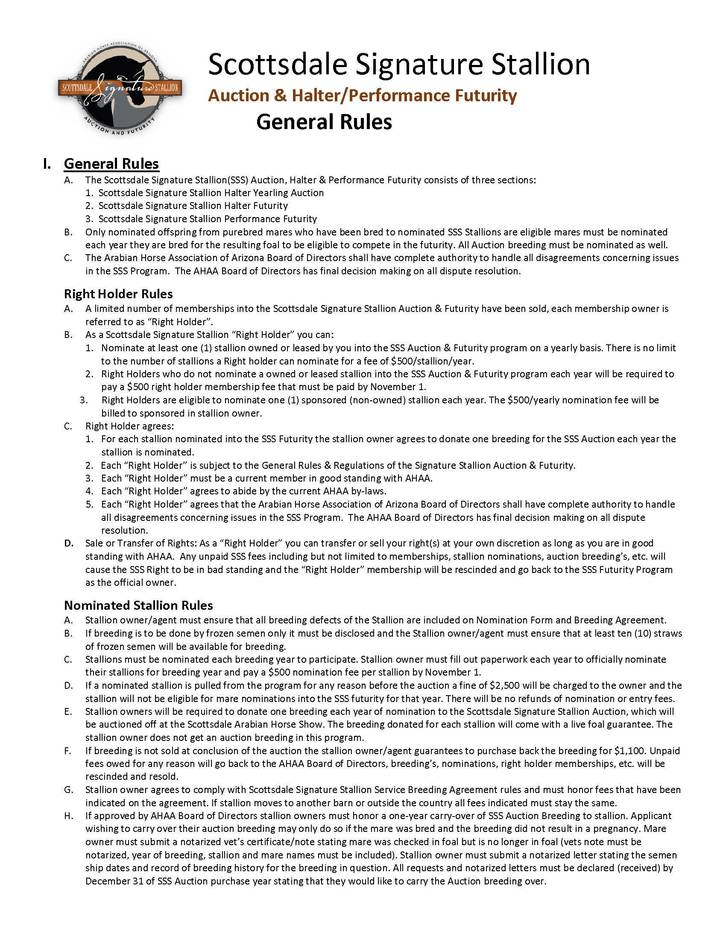 In the spring of 2002 the Arizona Arabian Horse Club was looking to revitalize their Arabian horse promotion program.

“We were tired of the same old ideas. We wanted to involve new people; get them excited about Arabian horses,” says Arizona Association Vice President Jay Allen, “We were looking for a venture that would involve our local breeders but also encourage lots of new general interest in Arabians, locally and nationally. So, (AHAA Director) Terry Holmes and I encouraged the club to consider other Futurity program concepts from around the country. There were some in California and in the Midwest that had good ideas, particularly the Minnesota Breeders.”

The “key” to success in these programs appeared to lie with a stallion auction based futurity. “There’s no doubt that the stallion auction idea seemed to be the right one for us. The Scottsdale Show is the ideal showcase for such an event,” adds Terry Holmes. “Stallion owners come here in February annually seeking a presentation venue to attract mare owners and breeders. The Stallion Service auction seemed like a great match for something that was already an important part of the Scottsdale experience. It looked as though it would be very successful.”

And so it was. The club decided to call it the Scottsdale Signature Stallion Auction & Futurity and began by making fifty AHAA Signature Stallion “Right” holdings available. A “Right” holder could register all of his personally owned purebred Arabian stallions, (plus one additional sponsored stallion belonging to another party) as a Scottsdale Signature Stallion and then participate in the Auction and Futurity. It was a great beginning and the first fifty “Right” holdings sold rapidly. Another ten were then offered and sold immediately as well. By the time the initial Stallion Service Auction was held during the 2003 Scottsdale Show, there were already 70 stallions involved. Expecting an approximate gross of $150,000.00 from the sale, the AHAA was excited and encouraged when the first sale topped $200,000.00.

In 2004 the first two classes, Scottsdale Signature Yearling Fillies ATH and Scottsdale Signature Yearling Colts/Geldings ATH, were held during the Scottsdale show. These classes were open to nominated yearling offspring of any of the Scottsdale Signature Stallions. Both classes featured an elimination series as there were well over a hundred total youngsters competing. The classes themselves turned out even better than planned. Well attended by both exhibitors and spectators, there was as much enthusiasm for these new SSS classes as there were the day before for the better established Breeders Cup program. The quality of the entries was great and the combination of top competition and impressive prize money lent real electricity to the event. The first Champion Filly was the Falcon BHF daughter, Fate BFA, owned by Sandra Smith. Warren and Margit Bentley of Geneva Arabians owned the Champion Colt, Master Design GA (Versace). The Champions each took home a substantial $8,074.94; the Reserves: $4,037.46 and the balance of the Top Ten: $1,369.85 each, for total prize money of $46,142.40 between the two classes.

The 2004 Stallion Service Auction was held Wednesday evening in the tent/arena just northwest of the Wendell Arena. Hundreds of people attended and just over a hundred stallions participated. There were bidders, owners and a lot of curious spectators too. The stallion service sale itself grossed $274,300.00, up over 35% from the previous year. The 2004 high selling stallion service was Magnum Psyche’s at $16,000.00. Second and third place stallions were Ames Charisma and Magic Dream and other top finishers included Justafire DGL, Odyssey SC and Padrons Psyche. Many of the stallions actually brought more than their published service fees, a fact that did not fail to surprise both the horsemen and the spectators. But there’s a real method to this apparent madness. Once the decision is made regarding the mare to be bred and the nominating fee is paid on 12/31, 2004, these are the ONLY foals eligible to compete in the two AOTH classes in 2006. Only the 103 successful bidders at the 2004 auction will be vying for an estimated $135,000.00 in prize money during the 2006 Scottsdale Show. It’s a stunning amount of money to be divided solely between the SSS Auction Yearling Fillies AOTH and the SSS Auction Yearling Colts/Geldings AOTH classes.

In 2005 there will actually be a total of seven classes at the Scottsdale Show for the new Futurity. Two will be the same Scottsdale Signature Stallion ATH classes for yearling fillies and yearling colts/geldings that were held in 2004. Three will be added to handle the two-year-old Scottsdale Signature Stallion ATH fillies, colts and geldings and two will feature the thrilling, aforementioned SSS – AOTH competition for the special Auction fillies and colts/geldings. Prize money for these classes comes from the Scottsdale Signature Stallion Auction and the stallion and dam yearly nomination fees. Nominated stallions pay a yearly fee to stay active. Foals become eligible by being signed up before 12/31 in the year prior to their birth via the mares’ nominations. They are nominated only that one time and the fee keeps them eligible through their fifth year for the halter and performance competition. Though, naturally the horses must be entered in the usual way and there are entry fees for the classes at the show. Starting in 2007 there will also be performance competition for three/four-year-olds in Country, Hunter, Western and English Pleasure. Five-year-olds will be added in 2008.

Distribution of the prize monies is total and here is a simple breakdown.

What remains is 20% of the Stallion Service Auction monies which the club sets aside for yearly expenses to advertise, promote and operate the auction and the program.

“One of the most important goals of the Scottsdale Signature Stallion Auction is to get people excited about breeding and showing Arabian horses,” says Taryl Pearson. “We’re all very aware of the fact that our registrations for Arabians have been dropping over the past few years. This program is specifically designed to regenerate interest and create enthusiasm among the breeders. Currently the program is only available to purebred Arabian stallions.

“I’m ecstatic about the program because of the opportunities it offers the amateur and amateur-owner,” says Jay Allen. “For some people the Scottsdale Show can seem big and overwhelming. I was particularly pleased by the large number of amateurs of all ages I saw competing this year at the show. This program can be a great encouragement to amateurs from all over the United States. Scottsdale is the most important and dynamic marketing show of the year. The Signature Stallion program allows everyone to participate in this super market of Arabian horses. Come and show your horse to people under ideal circumstances. The much talked about ‘playing field’ is very level in these amateur and amateur/owner classes and there’s nothing insignificant about the prize money. Come on down. You have a good chance to play and win!”

“There are some questions about the Scottsdale Stallion Signature Auction & Futurity that I’m asked regularly,” says Taryl. “They include . . .”

How can I get my stallion in the program? If you call and ask, we’ll send you a list of the names and addresses of “Right” holders. Each “Right” holder has one sponsorship option that may be available.

How can I get involved in this program? You can breed a purebred Arabian mare to one of the Signature Stallions and nominated it via the mare nomination before 12/31 of the year prior to its birth.

How do I know which stallions are nominated Scottsdale Signature Stallions? This information, as well as nomination forms, is available in our Stallion Directory.

How can I be a competitor for the big Amateur-Owner prize money? You must be a successful bidder at the annual auction held each year at the Scottsdale Show in February and nominate the mare you are breeding before 12/31 of the year prior to her foal’s birth. Then, when your filly, colt or gelding is ready to compete as a yearling, enter the Scottsdale Show and come and show!

I don’t show in Halter. How can I participate? When your horse is three, he becomes eligible for the Performance portion of the Futurity and can compete for prize money as a Three/Four-year-old and as a Five-year-old.

“This program is also enormously beneficial to the stallion owners,” adds Terry Holmes. “In addition to the auction, we place ads in the publications and offer publicity and videos via our booth at major functions. There is a ‘cap’ on the number of stallions that can participate based on the limited number of ‘Right’ holders. These limits will make the participating stallions and their offspring even more important and valuable as the program matures. Scottsdale has always been a primary opportunity for breeders to evaluate stallions and make their breeding choices for the year. The Scottsdale Signature Stallion Futurity is a perfect complement.”